Not ideal, but since we seem to find ourselves in Europe quite often, we figured it would be a good first taste for Shawn, and I had been once before.

We arrived mid-afternoon after a 3 hour train ride from Milan.  It was HOT.   We schleped our bags the 20 minutes from Termini to our hotel, Residenza Torre Colonna Rome – which just happened to be in a 15th century guard tower! Essentially right next door to the Alter of the Fatherland and the Roman Forum!

The Residenza Torre Colonna Rome was a delight.  Its a boutique hotel so there are only 5 rooms total, each room is an entire floor of the tower.  And the customer service was out of this world.  I had indicated on our reservation that we were traveling around Europe for Shawn’s 50th, so they had a bottle of prosecco waiting for us!  And suggested we enjoy it on the roof. OVERLOOKING THE FREAKING ALTER OF THE FATHERLAND! 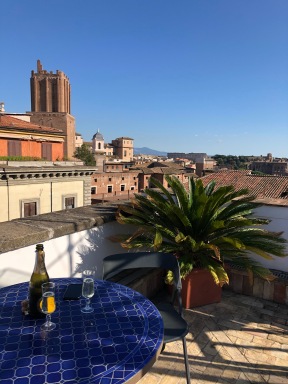 It was really hard to leave this.  We could have spent the next 32 hours just chilling in this hotel.  But, we had things to see.  I decided to give Shawn a world of wind tour of Rome.  As many sites as we could see in 32 hours.  And, I kind of killed it.

First up, obvs, the Alter of the Fatherland, since it was right next door.

Then a stroll down to Largo di Torre Argentina, where Julius Caesar was murdered all those years ago.

I think my favourite part about Italy is you’ll be walking down a modern street in a major city and then BOOM, this amazing piece of history is right there.  And then turn another corner and BOOM, more history!

Next up was the Pantheon, my absolute favourite to visit in Rome.

We made a brief stop in Piazza Navona to try and see the fountains, too many other tourists.  So a quick stop for amazing gelato from Grom (get the pistachio!) and we were back on the move.

Headed over the Ponte Sant’Angelo to get eyes on the Castel Sant’Angelo.  Since I’m an atheist, Castel Sant’Angelo and the Vatican don’t tick a lot of boxes for me.  Don’t get me wrong, they’re gorgeous.   But, not my jam. And this area seems to be swarming with the scam tricksters who are constantly trying to get you to buy something or have you let your guard down for 5 seconds so they can steal all your shit.

So we went, and saw and then escaped as quick as can be, with all our belongings still intact.

And headed down to the Tiber for a stroll towards the Trastevere neighbourhood. 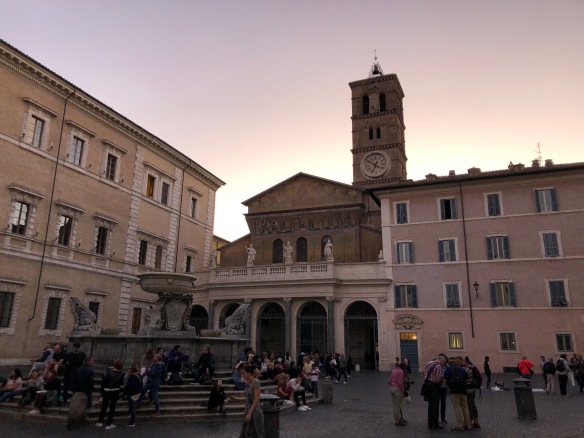 Come on, how GORGEOUS is this city?!

Keep in mind, we banged all this out in around 2.5 hours.  Rome is so insanely walkable.  Another reason I love this city so much.  We were actually early heading to our dinner reservation in the most southern part of the Trastevere neighbourhood.  So we walked into a bar across the street, enjoyed some spritzes and waited for them to open… only to discover there had been a family emergency and they were closed.

Now what? Well I follow Katie Parla on instagram and used her restaurant suggestions on her website to book this now closed restaurant, so I hoped back on her site and looked for places in the neighbourhood over – Testaccio, a more working class neighbourhood, but one that would be on our way back towards our hotel.

And, like usual, her recommendation did not disappoint! We ended up choosing Piatto Romano, for a more roman dining experience.

Salad of local wild greens with an olive oil dressing 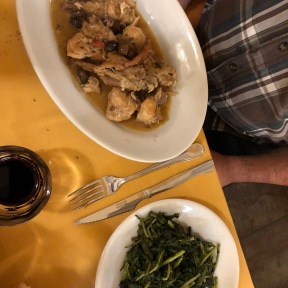 That’s local wild greens in an olive oil dressing, rabbit with sauteed broccolini, black garlic pasta and a tiramisu.  We were stuffed! It was fantastic.  We got a carafe of house red, and it turned out to be a very reasonably priced meal.  If you’re in Rome and looking for a delicious meal, head to Piatto Romano!

We continued our walk home by heading back to the Tiber and following it towards the hotel.  We ended up passing by more ruins and the gorgeous Teatro Marcello.  We also learned that the ruins are loved by rats at night.  All of them were swarming with rodents! Bleh!

We finished our day’s adventure passing by the Alter of the Fatherland, and briefly checking out the Trajan forum from above before crashing into our beds.  In total we did 24,695 steps!